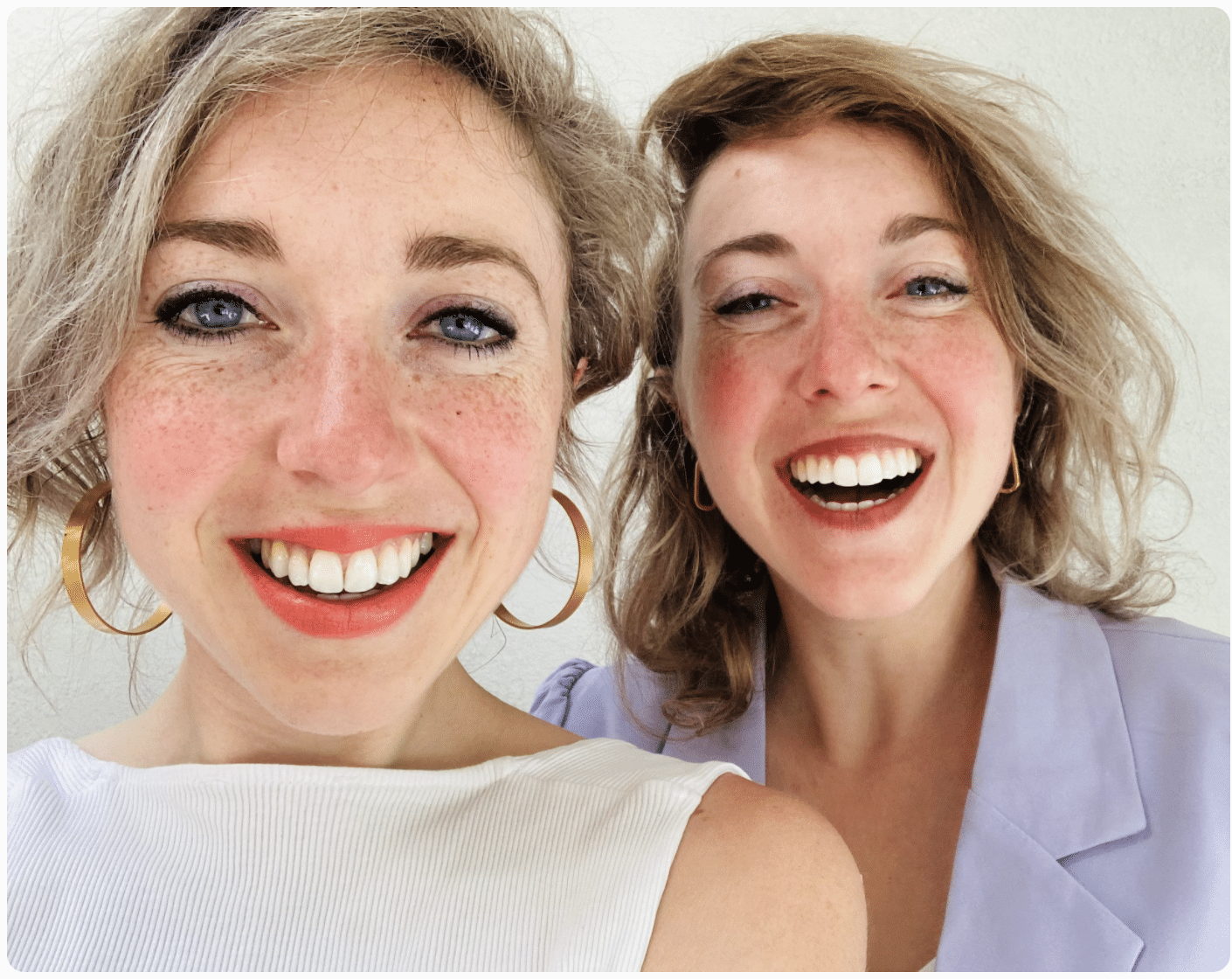 Hi! We are Lyla & Jasmijn Kok, founders of Nanny Nina. Our goal is for parents to enjoy themselves, while their children also have a great time. Finding the ideal babysitter is a very personal quest, which we like to make a lot easier. Our database is full of reliable, fun, naturally sweet nannies with the perfect match for every family. Last minute appointment, grandma who can’t come, unexpectedly the children at home for a day? Whatever the situation, with Nanny Nina the babysitter is arranged in no time.

We are all about trust and freedom. We provide a reliable babysitter – or childminder or au pair – so that parents can focus on their work or have some time to themselves. At the same time, we help our nannies to make a serious career out of their babysitting job. At the Nanny Nina Academy we train interested parties in six months to become a pedagogical professional to get started as a childminder. We like to help women in their strength, so that they can get the best out of themselves.

Fun and educational movies for kids!

Date: 23/08/2022
Author: Nanny Nina
About the Author: Hi! This has been published by one of our content queens. Do you have any questions or remarks about the blog? Please let us know!
Contact: [email protected]

People like to watch movies. Letting yourself go completely into the wonderful world of film and TV is magical. Whether it’s a night out at the cinema or on your own couch at home, the magic remains the same. Film is a wonderful medium because it is really something for all ages. I can understand that sometimes you can’t see the forest for the trees.

There are millions of movies for kids on this globe, in a thousand different ways to watch. Netflix, Disney-plus, Videoland, the good old DVD player, you name it. To give you some overview, we’ve made the ultimate movie guide for you. An overview of films for children up to and including 10 years. Choosing a movie for Dutch kids has never been so easy!

Movies for kids from 4 years old or younger

Children four years old or younger watch very different movies than children who are eight. Below are the movies that children up to 4 years of age like to watch:

This sweet little bear used to be one of my favorites. He has many adventures with his friends. Winnie the Pooh are films mainly for the little ones, but certainly not to be written off for the older children with a young soul! Unfortunately, they are no longer on Netflix, but Disney-plus has a number of Winnie the Pooh movies. I liked them all equally, and I think the kids are hooked after one movie! After all, who isn’t a fan of little Winnie?

Miffy is of course a classic. This is also a great entertainment for children under 4. It teaches your kids about various interesting topics in a playful way. There is a Miffy film entitled ”colors, numbers and shapes”, but also ”discover the world with Miffy.” The tune will stay in your head forever, I must warn you about that! Both Netflix and Videoland have various Miffy movies available.

One of my favorites on this list is Shaun the Sheep. To give a little picture; my dad is a huge fan of this. It is made with clay and is a humorous film about a sheep on a farm, with all its perils. These films are really for all ages, and are one of the most fun to watch, especially as a parent or babysitter. Several Shaun the Sheep movies are available on Netflix and Hulu.

There are of course dozens of Disney movies, but in this list, I have chosen the best! Finding Nemo, for those who don’t know, is about a small fish that is caught by a boat. His father is determined to get him back. During this journey through the sea, he meets Dory, a quirky blue fish. I think Finding Nemo is a wonderful movie because it’s about family, friendship, and being a little different. It’s a great movie to watch! Finding Nemo, like all Disney movies, can only be found on Disney-plus

Music and penguins. What else do you want? Happy Feet is a very cheerful movie that will have you dancing through the living room! In short, it’s about a penguin who falls by the wayside compared to his family. But in the end, it will all work out! Happy Feet is the film to educate your child musically at an early age. It can only be found on Netflix. And don’t forget to make sure you turn up the speakers!

Movies for kids between 5 and 8 years old

Children between 5 and 8 years old still have the same taste in cinema. Below I have made a list of the films that children between the ages of 5 and 8 like to watch:

Maybe this is my own nostalgic opinion, but Pluk from the Petteflet is a very nice film. The film is about Pluk, a boy with a red car. When the park next to his flat threatens to be destroyed, he does everything he can to save this park. Pluk from the Petteflet is a live action film with dolls. It resembles the world as we know it, only animals can talk and there is a horse with a lot of legs! Sounds perfect, right?

Pluk is on Netflix and on Videoland. No excuse not to watch it anymore!

This movie is a Japanese animation movie. This can quickly scare people off, but it’s completely unnecessary. The film is from Japan’s Studio Ghibli, a renowned studio that produces beautiful, world-famous works. Kiki’s delivery service is about a young witch who has all kinds of adventures flying on her broomstick while delivering sandwiches. It is a wonderfully humorous film with happy songs and I can guarantee that it will put a big smile on your face. It’s only on Netflix.

Charlie and the Chocolate Factory

I think all parents are familiar with this title. This film is a huge feel good film and a real classic, and therefore could not be missing from my film list. It’s a film adaptation of Roald Dahl’s book, so a perfect excuse to read the book with your child too! (And of course you should always read the book first and then the movie, but if you want to do it the other way around, I’ll turn a blind eye). This film is also only available on Netflix.

Christmas movies should really have their own blog, but I wanted to mention this one anyway. Klaus is a fairly new film, but immediately conquered a place in my heart. The animation is beautiful, the film has humor and also a nice moral. As a 20-year-old I just watched this on my own, so I can say with certainty that it is a film for young and old! This movie is a Netflix Original so is only on Netflix.

Movies for kids aged 8 to 10 years

Children between the ages of 8 and 10 like to watch movies that are a bit more exciting. For example, think of:

The rise of the guardians

This animated film is best described as magical. In this film, all fictional figures appear as the Easter Bunny, Santa Claus and Klaas Veel. Together they must ensure that the villain does not plunge the world into darkness! The film can be a bit exciting and is therefore for the tough kids! This movie is one of my favorite animated movies and that’s why I really recommend it. It keeps the magic of all these figures alive for a while, but is also fun when a child already knows that they do not exist. Because why not bring back a little magic? This movie is on Netflix

In other words, the first gangster movie for children! Boskampi’s is a Dutch live-action film about Rik, who turns his father Paul into a mob boss. The problem is, his father doesn’t know about this! This entails hilarious activities.

This movie can be seen on Netflix and on Amazon.com.

When her father is sent to Afghanistan, nine-year-old Kiek becomes increasingly concerned that something will happen to him. But, her mother and a teacher tell her, the chance of a dead father is very slim. Her childish logic makes Kiek reason that if she also has a dead mouse and a dead dog, that chance will be much smaller.

Heavy material on paper for the young target group, but the beautiful animation scenes that depict Kiek’s rich fantasy provide enough lightness. This film is not on Netflix or Videoland, but can be watched for free on NPO-start. A good Dutch film to get a taste of our own culture.

Of course, this list is only a guideline. If your child is 7 and really wants to see the Boskampis, it is up to you as a parent or babysitter to determine whether your child can actually handle this. All in all, it is important to watch a lot of movies with your kids.

Also watch along, nothing is more fun than watching a movie together and then being able to talk about it. It is often underestimated the effect of films on a child’s upbringing, but it can be very educational and fun. As long as you pick the good movies. And that’s exactly what this list is for.